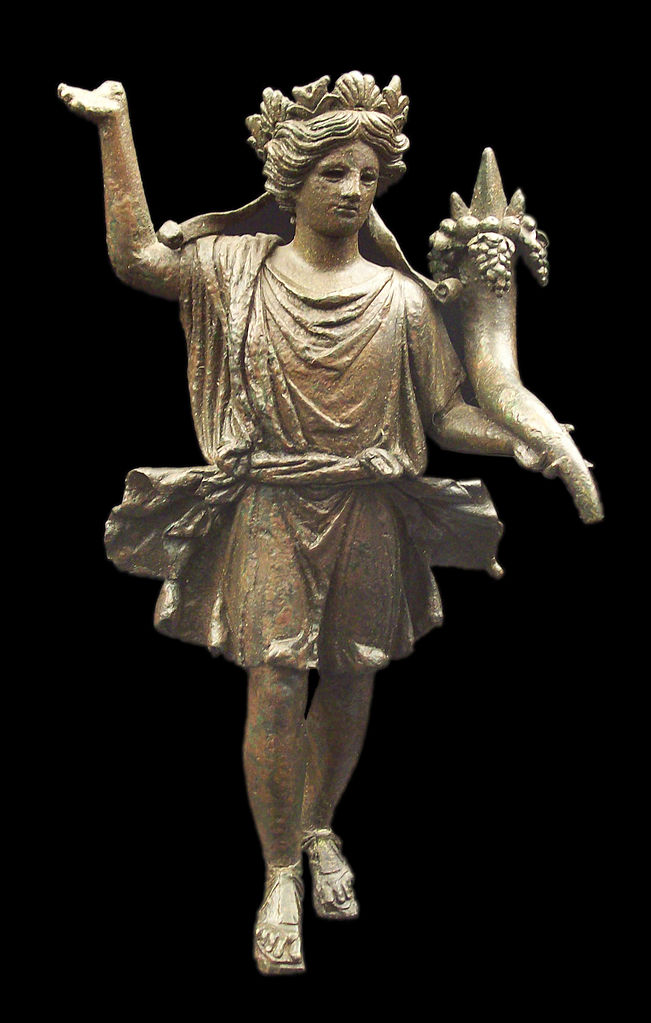 Lares (/ˈlɛəriːz, ˈleɪriːz/LAIR-eez, LAY-reez,[1]Latin: [ˈlareːs]; archaic Lasēs, singular Lar) were guardian deities in ancient Roman religion. Their origin is uncertain; they may have been hero-ancestors, guardians of the hearth, fields, boundaries, or fruitfulness, or an amalgamation of these.

Lares were believed to observe, protect, and influence all that happened within the boundaries of their location or function. The statues of domestic Lares were placed at the table during family meals; their presence, cult, and blessing seem to have been required at all important family events.

Roman writers sometimes identify or conflate them with ancestor-deities, domestic Penates, and the hearth.

Because of these associations, Lares are sometimes categorised as household gods, but some had much broader domains. Roadways, seaways, agriculture, livestock, towns, cities, the state, and its military were all under the protection of their particular Lar or Lares. Those who protected local neighbourhoods (vici) were housed in the crossroad shrines (Compitalia), which served as a focus for the religious, social, and political lives of their local, overwhelmingly plebeian communities. Their cult officials included freedmen and slaves, otherwise excluded by status or property qualifications from most administrative and religious offices.

Compared to Rome’s major deities, Lares had limited scope and potency, but archaeological and literary evidence attests to their central role in Roman identity and religious life. By analogy, a homeward-bound Roman could be described as returning ad Larem (to the Lar). Despite official bans on non-Christian cults from the late fourth century AD onwards, unofficial cults to Lares persisted until at least the early fifth century AD.

Archaic Rome’s Etruscan neighbours practiced domestic, ancestral, or family cults very similar to those offered by later Romans to their Lares.[2] The word itself seems to derive from the Etruscanlar, lars, or larth, meaning “lord”.[3][4] Ancient Greek and Roman authors offer “heroes” and “daimones” as translations of “Lares”; the early Roman playwright Plautus (circa 254–184 BC) employs a Lar Familiarisas a guardian of treasure on behalf of a family, as a plot equivalent to the Greek playwright Menander‘s use of a heroon (as an ancestral hero-shrine).[5] Weinstock proposes a more ancient equivalence of Lar and Greek hero, based on his gloss of a fourth-century BC Latin dedication to the Roman ancestor-hero Aeneas as Lare (Lar).[6]

No physical Lar images survive from before the Late Republican era, but literary references (such as Plautus’ singular Lar, above) suggest that cult could be offered to a single Lar, and sometimes many more; in the case of the obscure Lares Grundules, perhaps 30. By the early Imperial era, they had become paired divinities, probably through the influences of Greek religion – in particular, the heroic twin Dioscuri– and the iconography of Rome’s semidivine founder-twins, Romulus and Remus. Lares are represented as two small, youthful, lively male figures clad in short, rustic, girdled tunics – made of dogskin, according to Plutarch.[7] They take a dancer’s attitude, tiptoed or lightly balanced on one leg. One arm raises a drinking horn (rhyton) aloft as if to offer a toast or libation; the other bears a shallow libation dish (patera). Compitalia shrines of the same period show Lares figures of the same type. Painted shrine-images of paired Lares show them in mirrored poses to the left and right of a central figure, understood to be an ancestral genius.