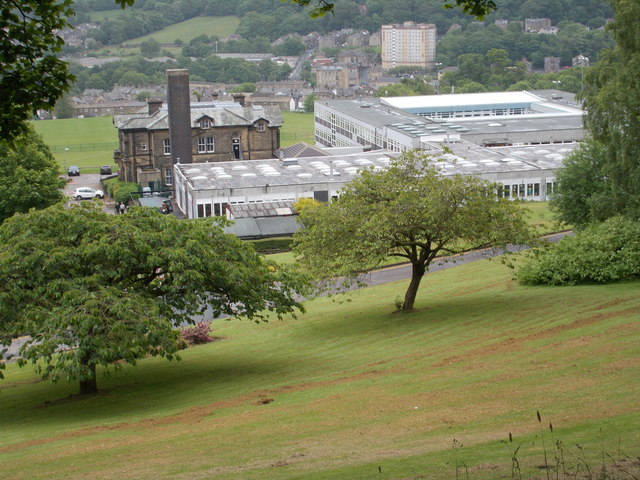 Beckfoot Oakbank is a mixedsecondary school and sixth form located in Keighley, West Yorkshire, England.[1] It is situated near Ingrow Lane on Oakworth Road (B6143) in the west of Keighley.

Oakbank was founded from the Drake and Tonson School as Keighley Trade and Grammar School in 1871. Around 1900 it became Keighley Boys’ Grammar School (KBGS) on Alice Street. Following a fire in 1962 in the Mechanics’ Institute (which also provided the school with its assembly hall and some classrooms) new buildings were built in 1964. Parents and staff over a 4-year period also raised £25,000 for the original swimming pool, now built over. On its move it became firstly and rather confusingly Keighley School for a few years despite still being a grammar, then in 1968 became Oakbank Grammar School with new uniform and oak leaf badge, when administered under Keighley Committee for Education. It is perhaps ironic that the name change to Oakbank Grammar coincided with its change to comprehensive status. Sixth form retained the green blazers with white stripes at this time, and a “third year sixth” was offered for Oxford and Cambridge candidates to prepare.

It became a co-educational school in 1967 with one year’s intake of sixth form girls, then the following year in 1968 a comprehensive school for ages 14 to 18, under the new name Oakbank Grammar School. The move from a boys’ grammar school was phased over a few years with new co-ed comprehensive intakes in what was then known as the Fourth Form. It changed its name to Oakbank School in 1990. During the same period of time[further explanation needed] the school, with pupils aged 13 to 19, moved to its current site from Bronte Upper School. In 2000 it became a secondary school for 11- to 19-year-olds through a re-organisation of British schools.

It became a Sports College in 1997, and gained Technology College accreditation in 2004.

The school was visited by former Minister for Sport, Gerry Sutcliffe.[when?]

Previously a foundation school administered by City of Bradford Metropolitan District Council, in September 2016 Oakbank School converted to academy status and was renamed Beckfoot Oakbank. The school is now sponsored by the Beckfoot Trust.

The school has been graded as satisfactory or better in all areas of the curriculum in its last two Ofsted inspections. Around 52% of pupils achieved five A* to C grade passes at GCSE in 2008.

Oakbank pupils have the choice of staying on to sixth form for further study and to gain further qualifications. In 2003 the new six form block opened, facilitating a higher number of pupils. In 2004 the Cove Centre of Vocational Excellence building was opened to provide more space