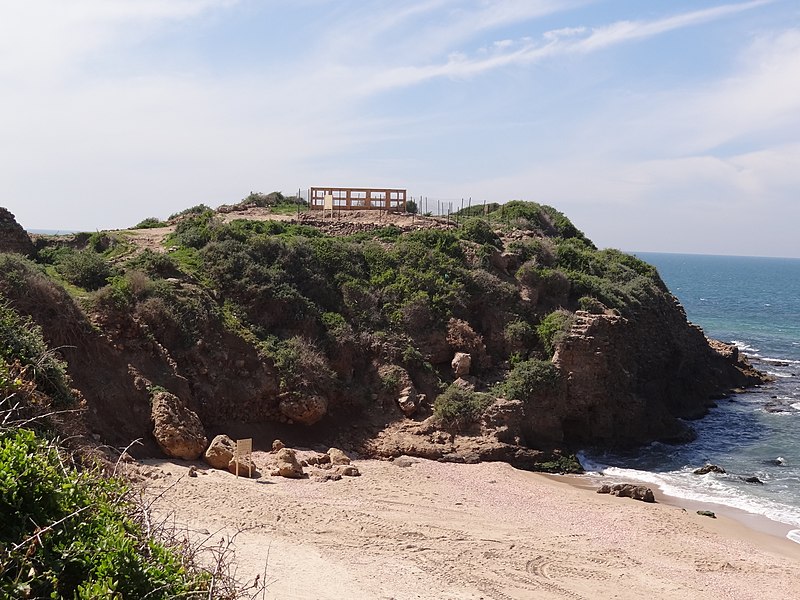 Yavne-Yam (Hebrew: יבנה ים‎, also spelled Yavneh-Yam, literally Yavne-Sea) or Minet Rubin (Arabic, literally Port of Rubin, referring to biblical Reuben; Greek: Ἰαμνιτῶν Λιμήν)[2][1] is an archaeological site located on Israel’s southern Mediterranean coast, about 15 km south of Tel Aviv. Built on eolianite[3] hills next to a small promontory forming the sole anchorage able to provide shelter to seagoing vessels between Jaffa and the Sinai,[4] Yavne-Yam is notable for its role as the port of ancient Yavne. Excavations carried out by Tel Aviv University since 1992 have revealed continuous habitation from the second millennium BCE up to the Middle Ages; the famous Yavne-Yam ostracon is named after the site.

For the Jamnia in Galilee, see Jamnith.

Surveys and excavations undertaken at Yavne-Yam during the 1950s and 1960s have revealed the existence of a large fortified site, consisting of a square enclosure with freestanding ramparts and marked by fortified gates, dating from the Middle and Late Bronze Age, during the second millennium BCE.[5] This has also been confirmed by underwater surveys undertaken in the harbor, which have uncovered pottery characteristic of the period.[4] Yavne-Yam may be the coastal city of Muḫḫazu (mHz) mentioned in the Amarna letters,[6][7] a name reminiscent of the Aramaic word for port.[8] It was inhabited during the late Iron Age, as testified by the Egyptian pottery and scarabs found at the site, as well as the discovery of Eastern Greek Pottery and several Hebrew-inscribed ostraca in nearby Mesad Hashavyahu. During the late 7th century BCE, the region apparently passed from Egyptian to Judean control, and was populated by Israelites, Canaanites, Phoenicians and perhaps even Greeks.[5]

The material culture uncovered at the site suggests that under Persian rule, Yavne-Yam was inhabited by Phoenicians from Sidon,[8] also revealing a strong Hellenic influence. Alexander the Great‘s conquest of the Levant magnified such effects, and Yavne-Yam displays the prosperity and increased Hellenization of the population resulting from the political changes brought about by the Macedonian conquest and subsequent Ptolemaic and Seleucid control.[5]

It was this Hellenization which eventually led to the Seleucid-Jewish conflict of the 2nd century BCE. What begun as tensions between hellenized and observant Jews, in 166 BCE erupted into an open revolt against the Seleucid Empire. Cities that had been thoroughly hellenized, such as Yavne (Iamnia) and Yavne-Yam, suffered the brunt of the Maccabean Revolt.[5] According to 2 Maccabees, Judas Maccabeus, first leader of the revolt, “attacked the people of Jamnia by night and set fire to the harbor and the fleet, so that the glow of the light was seen in Jerusalem, thirty miles distant.”[9] Discoveries at the site and elsewhere, however, cast doubt on this account. During a preliminary survey conducted in December 1986, a fragmentary Greek inscription was found in Yavne-Yam, documenting correspondence between Seleucid king Antiochus V Eupator and the local Sidonian community. Dated to the summer of 163 BCE, it reveals the longstanding cooperation of the town with Seleucid authorities,[5] at a time when inland Yavne was known as a base for operations against the rebels.[10] Furthermore, the discovery on Delos of altars erected by the citizens of Iamnia and the persistence of Greek ware in the archaeological record have led archaeologists to believe Yavne-Yam had in fact resisted Maccabean attacks and remained a free Greek city for decades after the rebellion. It was eventually sacked and incorporated into the Hasmonean state in the late 2nd century BCE, during the rule of John Hyrcanus or Alexander Jannaeus.[8]