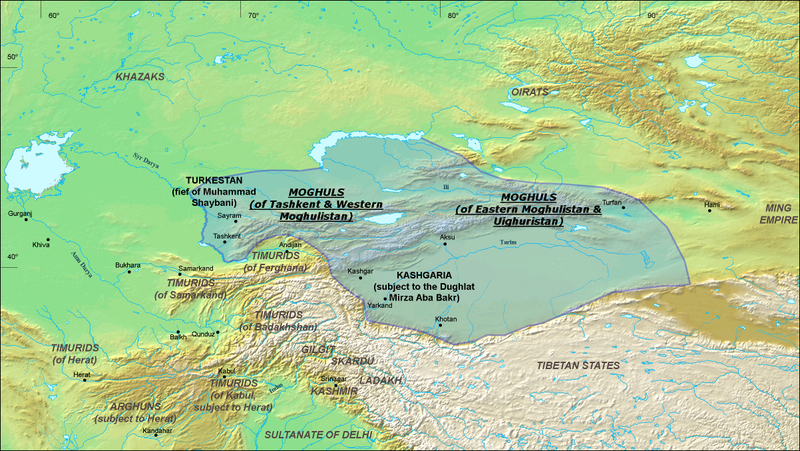 Moghulistan (Mughalistan, Moghul Khanate) (from Persian: مغولستان‎, Moqulestân/Moġūlistān), also called the Eastern Chagatai Khanate (simplified Chinese: 东察合台汗国; traditional Chinese: 東察合台汗國; pinyin: Dōng Chágětái Hánguó), was a Mongol breakaway khanate of the Chagatai Khanate and a historical geographic area north of the Tengri Tagh mountain range,[2] on the border of Central Asia and East Asia. That area today includes parts of Kazakhstan, Kyrgyzstan, and northwest Xinjiang, China. The khanate nominally ruled over the area from the mid-14th century until the late 17th century, although it is debated whether it was a continuation of the Chagatai Khanate, an independent khanate, or a tributary state to the Ming dynasty.

Not to be confused with Mongolia or Mughal Empire.
Mongol breakaway khanate of the Chagatai Khanate

Beginning in the mid-14th century a new khanate, in the form of a nomadic tribal confederacy headed by a member of the family of Chagatai, arose in the region of the Ili River. It is therefore considered to be a continuation of the Chagatai Khanate, but it is also referred to as the Moghul Khanate.[3]

In actuality, local control rested with local Mongol Dughlats or Sufi Naqshbandi in their respective oases. Although the rulers enjoyed great wealth from the China trade, it was beset by constant civil war and invasions by the Timurid Empire, which emerged from the western part of the erstwhile Chagatai Khanate. Independence-minded khans created their own domains in cities like Kashgar and Turfan. Eventually it was overcome by the Kyrgyz, Kazakhs, and Oirats. In the east, the Yarkent Khanate continued until it was conquered by the Dzungar Khanate in the early 18th century.

“Moghulistan” is a Persian name and simply means “Land of the Moghuls” or Mongols (the term Mughal is Persian for “Mongol” and -istan means land in Persian) in reference to the eastern branch of the Mongolian ChagataiKhans who ruled it.[5] The term “Moghulistan” occurs mostly in Soviet historiography, while Chinese historiography mostly uses the term “East Chagatai Khanate” (Chinese: 东察合台汗国; pinyin: Dōng Cháhétái Hànguó), which contrasts Moghulistan to the Timurid Empire. The Moghul Khans considered themselves heir to Mongol traditions and called themselves Mongghul Uls, from which the Persian term “Moghulistan” comes. Ming Dynasty Mandarins called the Moghuls “the Mongol tribes (Chinese: 蒙古部落; pinyin: Ménggǔ Bùluò) in Beshbalik“. The Timurid exonym for Moghulistan was Ulus-i Jatah.[2]

When the Mongols conquered most of Asia and Russia in the 13th century and constructed the Mongol Empire, they lived as minorities in many of the regions they had subdued, such as Iran and China. As a result,[citation needed] the Mongols in these regions quickly adopted the local culture. For example, in the Persian Ilkhanate the Mongol khans adopted Islam after less than half a century, while the khans of the Yuan Dynasty embraced Chinese court customs. In contrast, the Mongols and their subordinates who settled in what came to be known as Moghulistan were in origin steppe nomads from Mongolia.[6] Because of this, they were much more resistant to changing their way of life; they retained their primarily nomadic lifestyle for several centuries and were among the last of the Mongols who converted to Islam to do so. During the 14th century the inhabitants of Moghulistan were known[by whom?] as “Mogul” and the area they occupied was called “Mirza/Baig“. This term is also used by numerous people in South Asia.

According to Vasily Bartold, there are “some indications that the language of the Moghuls was Mongolian until the 16th century”.[7]