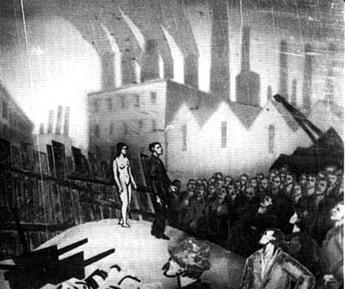 The Idea (French: L’Idée) is a 1932 French animated film by Austro-Hungarian filmmaker Berthold Bartosch (1893–1968), based on the 1920 wordless novel of the same name by Flemish artist Frans Masereel (1889–1972). The protagonist is a naked woman who represents a thinker’s idea; as she goes out into the world, the frightened authorities unsuccessfully try to cover up her nudity. A man who stands up for her is executed, and violent suppression by big business greets a workers’ revolution she inspires.

A thinker sits by a window, and an idea comes to him in the form of a doll-sized naked woman. The thinker puts the woman in an envelope and sends her out into the world. She finds herself in an office building, where the frightened authorities attempt to clothe her, but she soon sheds the clothing. She becomes involved with a young working class man, and he appeals to the people on her behalf; he is captured and executed, and his coffin is carried through the streets by the people. Another man presses her into a book, and delivers handbills of her to the frightened people. She is captured by a businessman, and armed soldiers are sent to put down a revolution of the people; the people are suppressed, and the woman, now white-haired, becomes a star and drifts into the cosmos.[2]

Belgian artist Frans Masereel had had success in Europe in the 1920s with his wordless novels made from woodcuts;[3] he pioneered the genre in 1918 25 Images of a Man’s Passion.[4]Passionate Journey followed the next year and caught the eye of German publisher Kurt Wolff,[5] whose republication of it topped sales of 100,000 throughout Europe.[6] In late 1929 filmmaker Janine Bouissounouse put Masereel in contact with the Surrealist painter Salvador Dalí, who was interested in including an animated sequence in a proposed film, which was never made.[7]

Berthold Bartosch, born in Austria-Hungary,[8] began his animation career in the Soviet Union and Germany. He participated in such works as Lotte Reiniger‘s The Adventures of Prince Achmed (1926)[9] before emigrating to France.[8] Wolff encouraged Masereel and Bartosch to collaborate on a film adaptation of one of Masereel’s wordless novels.[3] They agreed in 1930 to collaborate on an adaptation of The Idea (1920).[10]